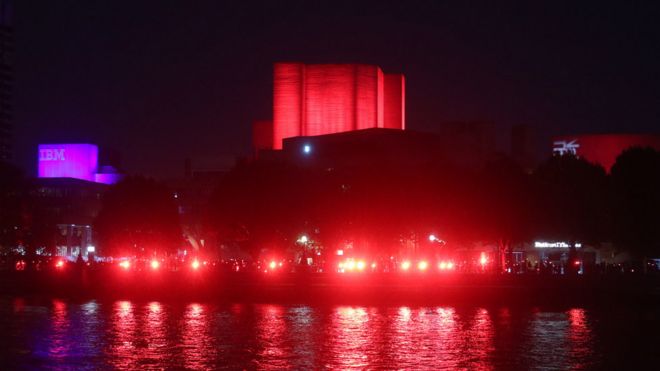 Quoted article below from BBC.com:

Music venues, theatres and their workforces have taken part in a day of action around the UK to highlight the crisis facing the live events scene.

More than 300 venues including London’s National Theatre and Royal Festival Hall turned their lights red as part of the Red Alert campaign.

And out-of-work music industry crew were among those who took part in a march through Manchester on Tuesday.

The Red Alert movement and #WeMakeEvents marches aimed to raise awareness about the threat of job losses in the sector.

Similar protests took place in other cities, as arts and event venues were illuminated to highlight the Red Alert theme.

The Royal Albert Hall explained on its Twitter account that it was supporting the campaign because “many livelihoods across the industry are now at stake”.

Our events rely on countless suppliers, manufacturers and freelancers and we will all need to work together to make the shows of the future.

Many livelihoods across the industry are now at stake and that’s why we are supporting #WeMakeEvents and #LightItInRed today. pic.twitter.com/iVrjmR2bQw

The Wales Millennium Centre in Cardiff gave a shout out to all the “amazing staff and freelancers in our sector who bring the live events we love to life”.

Tonight we continue to #LightItInRed in support of all the UK’s live event venues, and the amazing staff and freelancers in our sector who bring the live events we love to life. #WeMakeEvents #FreelancersMakeTheatreWork #theatre #festival #LetTheMusicPlay #OliverDowden pic.twitter.com/3WTdhFgzyI

Some of Scotland’s most famous venues, including King Tut’s Wah Wah Hut – where rock band Oasis were discovered – also went red for the cause.

Tonight. Some of Scotland’s most iconic venues and landmarks were lit up red to show support for the music industry. Please share #lightitupredscotland #wemakeevents pic.twitter.com/BqSGMCs5G9

Wembley Stadium, England’s national football stadium and a gig venue, declared that it was “proud to support our music industry in its time of crisis”.

Wembley Stadium is proud to support our music industry in its time of crisis. #WeMakeEvents #LightItInRed pic.twitter.com/h3Erutxe2o

And smaller venues like the beloved Brudenell Social Club in Leeds also joined in.

We recognise the interconnected ecosphere we all work in, and that without the skill, passion and knowledge of these people, the industry does not work! ?

Virtually all UK venues have been closed for five months, putting many at risk.

Organisers of Tuesday’s protests said around a million people work in the events sector, many of whom are freelancers, and they are in danger of losing their livelihoods without additional government support.

Freelance audio technician Alistair Westell had been booked for several events around the world before the coronavirus outbreak.

“For me personally, everything in my diary popped out in March, including the Olympics in Tokyo, which I should have been working at last week,” he told BBC News. “I’m used to quiet spells, but with this everything went off like a light switch. [Most events] have been pushed back until next year, if at all.

“I must admit, I’ve had a few sleepless nights. Luckily, I have a partner who is still working, but the money I’m living on is savings, so it’s affected us quite badly.”

Westell explained that freelancers and venue staff are crucial to an event’s success, even though they “aren’t very visible”.

“We’re often behind the scenes – if we’re seen it usually means something has gone wrong!” he said. “We try to stay in the background, and that’s one of the reasons we’ve been forgotten.”

The work involved in putting on a live event such as a concert or conference is “a huge team effort”,” he added.

“There’s lighting, graphics, sound, video, rigging, staging… and then you’ve got the other side of it – the toilets and the catering for the audience, artists and crew. Then there’s security – you often see security staff pulling people out of the crowd at the front when they’re in trouble.”

On Monday, it was announced that Elbow and a string of other the bands will perform one-off gigs to raise money for grassroots music venues.

On Tuesday, the Arctic Monkeys announced a Crowdfunder campaign to raise money for The Leadmill in their home city of Sheffield and other venues.

“From my own experience with [music festival] Parklife, there are about 4,500 people working on that,” he told Radio Manchester.

Singer-songwriter Peter Gabriel said: “A lot of high arts have now been given some support, but people working on the festival side of things and in live events have been forgotten about.

“Many of these people are freelancers so don’t fall under furlough schemes. So right now they are feeling the pinch very badly.”

Last month the government announced a £1.57bn support package aimed at protecting theatres, galleries and museums. The government has previously said that will lead to more work for freelancers.

The furlough scheme and support for self-employed people are due to end in the coming months – and many freelancers were not eligible for them at all.

“Without major, immediate support from government, the entire live events sector supply chain is at risk of collapse,” said the members of The Cure in a statement.

“The aim [of the campaign] is to have financial support extended for the people and companies in this sector, until they can return to work.”