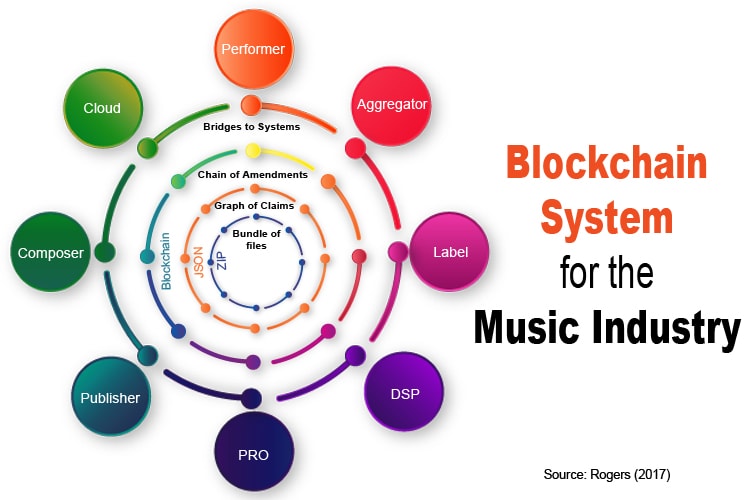 While everyone is looking for the new solutions to help the music industry to survive these times. We take a look at an existing tech that might help the musician, record label and rest of the media industry workers to survive.
Blockchain and cryptocurrency might feel overly complicated for some. But we found a news article below that makes some interesting points on the subject. Expect more articles on this subject. Follow us on social media to keep updated: Facebook Twitter

Article cited below collected from cointelegraph:

Blockchain technology is tipping the scales of the music industry, shifting the power from intermediaries back to artists.

While the distributed ledger system created alongside Bitcoin has a powerful use case in the realm of currency and assets, in which value can now be digitally transferred without any middlemen or risk of duplication because ownership is immutable and provable, these same applications can be translated into many other industries beyond finance.

In this instance, the music industry, which has too often been dominated by gatekeepers, will go under the microscope. While the advent of the internet — followed by streaming platforms such as Napster, Soundcloud and now Spotify — has changed this to a degree, blockchain technology seems to be the next step when it comes to giving power back to creators and their listeners.

So, how is blockchain changing the music industry? One of the, if not the, most noticeable of its effects is the ability to remove middlemen from the process of music sales and streaming. While streaming platforms have changed the way music is consumed, making it more widely available to the listener, it has also created a whole new level of intermediation between artists and fans.

The music streaming industry has certainly come as a stark improvement, providing a cost-efficient and user-friendly alternative to piracy, allowing artists to receive royalties for their work. However, with this shift, the undeniable discrepancy in terms of the distribution of royalties has come to light. As is the case with many things, the distribution of royalties to artists resembles a Pareto chart where a very small percentage of artists account for the majority of music streams and thus royalty earnings.

This payment discrepancy is due to many factors, including an artist’s music genre and country of origin. While localized services such as China’s AliMusic can help combat these issues on a geographical level, it is likely that the distribution of royalties will always remain skewed, with a handful of hyper-productive artists dominating the majority of the market.

While the skewed distribution is unlikely to be fully addressable, improving conditions for emerging artists can make a huge difference and result in a more diverse market. It can also help shift the control currently held by third-party intermediaries such as labels and platforms, which have considerable influence over what music gets to be heard by the general public.

Blockchain-based music streaming platforms are trying to tackle this very problem. Opus, for example, leverages two different peer-to-peer networks to remove middlemen completely and provide a fully decentralized streaming platform. Opus uses the InterPlanetary File System, or IPFS, which is a P2P network for file sharing and storage where users of the network also act as servers. This way, all hosting fees associated with streaming are virtually removed.

Opus also leverages the Ethereum network as a payment layer. Through the use of smart contracts, it allows artists to be paid directly upon the purchase or stream of a song, which means that both the content and royalties are independently distributed. This system allows the artist to retain almost all of the payments made by premium users or ad revenue generated by freemium users, which, according to Opus, is where the majority of revenue comes from — as high as 90%.

Other platforms such as Mediachain, Musiclife, eMusic and others focus on the same royalties issue and use similar technology to provide independent artists with a bigger piece of the pie they are effectively creating. However, blockchain technology is also becoming an easy and streamlined way for independent artists to deal with other facets of the industry that can often be challenging for upcoming artists. A report by Opus reads:

“Given the small scale of operations and low financial independence, smaller artists need to have high levels of financial and legal literacy, in order to secure their own financial stability.”

Ujo, a New York-based company, provides a decentralized database of music ownership where artists can not only upload their works and earn 100% of their sales and tips with no fees but also automatically split payments with collaborators of each project. Another project from the United States, the Open Music Initiative, uses blockchain technology to identify music rights holders and has already drawn the likes of Soundcloud, Sony, YouTube, Spotify and Netflix as members, showcasing just how impactful the technology can be.

In a 2017 article for the Harvard Business Review, Imogen Heap — an English singer-songwriter, record producer and audio engineer — recalls an incident where a visual artist had all of his videos taken down from Vimeo for using a 30-second clip of one of Impogen Heap’s songs. According to her, blockchain technology can help, and already is helping, to solve these issues. She wrote:

“I’d personally like to avoid these types of situations in the future, which means providing an easy way for others to license and collaborate with my music. A blockchain-empowered rights and payments layer could provide the means to do so.”

Blockchain is already improving the way artists, especially independent ones, are paid and increasing the amount they get to keep while also streamlining the process of copyrighting and distributing the work, which doesn’t just end there. Blockchain technology already allows musicians to tap into another key category for independent artist revenue: highly engaged communities.

Independent and upcoming artists are often on the receiving end of a strong sense of community, which translates into a constant stream of financial support from fans. It’s a sort of “support local artists” mentality that may explain why 32% of the market share in revenue for both physical and digital music sales is held by independent labels, according to Opus. Concerts and merchandise are also known to represent a large portion of revenue, but blockchain technology now provides new ways to explore this even further.

ANote Music, a Luxembourg-based startup, announced earlier this week that it will launch a blockchain-based platform that will give artists a new way of accessing capital by allowing users to invest in music royalties. The platform is set to launch on June 28, and it will also seek to allow listeners to capitalize on their musical insight by buying and trading music royalty shares on a secondary market. Marzio Schena, the co-founder and CEO of ANote Music, explained to Cointelegraph at the time: “Our goal is to unlock the hidden value in music for both investors and artists by creating a stock-exchange platform for music investments.”

The aforementioned platform Ujo allows users to sell digital badges that support the artist and act as “collectible” items, which has become one of the most popular applications for nonfungible tokens. It also allows users to tip their favorite artists directly. Choon and eMusic, two other streaming platforms, allow artists to crowdfund projects, creating a new revenue stream while generating a monetary investment in the recording and marketing of a song or a full-length project.

Blockchain-backed projects can also create monetary incentives for music fans, making the whole experience more interactive and rewarding. While some platforms such as eMusic reward fans through exclusive content and lower prices, other methods are also being applied. Choon, for example, offers listeners rewards for curating personalized playlists, and Viberate rewards fans with its native VIB tokens for contributing to its database of artists, venues and events. The Inmusik platform has a similar system that rewards users with Sound Coins ($OUND) to curate artist rankings.

While platforms such as Viberate already feature over 450,000 artists, which is an impressive feat, industry giants are also trying out new blockchain-based incentive models — most noticeably, one of the three major labels in the industry, Warner Music Group. According to an article published by Forbes, Warner Music has joined an $11.2 million investment in a new blockchain network called Flow, which was created by Dapper Labs. Jeff Bronikowski, the global head of strategic music initiatives at Apple and the former senior vice president of business development at Warner Music, previously told Cointelegraph: “The main goal is to create new avenues where the fans of our artists can explore their fandom and engage with the artists in new and different ways that they haven’t done before.”

The future of blockchain in music

So, will blockchain technology help shift control and revenue back into artists’ hands? It seems like progress is already being made, but there is also a lot of room for growth, as artists are drawn to relatively higher earnings. The same can be said for listeners that can now even themselves enjoy incentives through some of these decentralized platforms.

While these improved incentives for both artists and fans may help push the use of blockchain in the music industry forward, the industry’s previous mishaps may play the crucial role in driving artists toward new and improved systems.